We tailor our services to fit your needs
Get StartedV

What You Should Expect from Us

As an investor, landlord or homeowner, you expect the highest level of service from your Shaw property management company in order to protect your investment. You also expect an industry-leading range of services offered within a pricing structure that adds value to your investment.

EJF Real Estate Services specializes in managing Shaw investment properties. Currently, we manage over 700 residential properties with over 97% occupancy. We look forward to working together to bring success to your investment too! EJF embraces the latest process, technology and industry innovations while employing the top property management employees in the region.

We pride ourselves on quality and dedication to serving our clients. We are pleased to offer you both innovation and value. We want our clients to stay satisfied and happy!

To accomplish this, EJF offers these Happiness Guarantees to our Rental Department clients:

If a tenant that EJF screened and placed under an executed lease agreement defaults on the initial term for their lease agreement, EJF will re-lease the Property and waive the Leasing Fee, as long as the default was without Owner approval. *

EJF is paid only when you are paid. If a tenant we place in your rental does not pay their rent as agreed in the lease, you don’t pay a management fee until they pay.

EJF charges a monthly Animal Administrative Fee to the tenant per each approved animal. EJF guarantees to cover the cost of any repair, above fair wear and tear, resulting from the approved animal(s) that is not covered by the tenant’s security deposit. This specifically excludes Service Animals per the Fair Housing Guidelines. This Animal Protection Guarantee is limited to an amount of $2,000.

If you are not satisfied with our services, you may provide a 90-day notice and cancel your contract with no penalty.

Our goal is to provide the best experience for your rental property. We promise to offer you the best customer service available and will always ‘make it right’.

Our Honest and Transparent Pricing Structure

We have a wide range of services to fit your needs:

Discover how much rent you can get for your investment

Shaw is part of the Northwest quadrant of Washington, D.C., emerging from some of the slave encampments of the pre-Civil War era. The original name was called 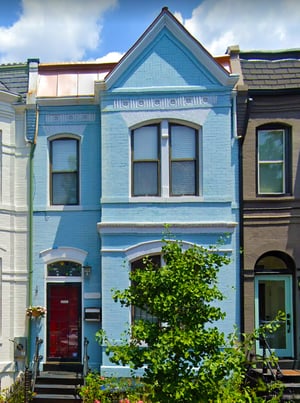 “Uptown” and the residential area was thriving in the late 19th and early 20th centuries as a national center of Black cultural and intellectual life. The name “Shaw” is after Colonel Robert Gould Shaw, who led one of the first official Black units during the Civil War, the 54th Massachusetts Volunteer Infantry.

Over the years the Shaw community has experienced many successes and failures, and yet it retains a level of dignity that has allowed it to be designated as the Shaw Historic District and to be listed in the National Register.

Just minutes from the heart of Washington, D.C., Shaw was part of the renewal and remodeling projects that employed African American engineers, architects, and urban planners to enhance D.Cs inner city areas. Although this movement brought about an excellence for the Shaw area it did not destroy the beauty of the existing Victorian row homes. With gentrification projects, many of these homes were converted to apartment complexes in the 2010s, which is one of the attractions to the area by young professionals that work in D.C. and the most important for the topic of Shaw property management

Old and New, Side by Side

Today Shaw is one that brings pride to local residents as it has become a very coveted area to live in. With a younger average age as well as above average income, Shaw has transitioned into one of the more “cool” places, especially because it offers so many rental opportunities. The current population is around 46,500 and the statistics show that the number of people that rent are twice those that own property.

The Shaw that we see today wouldn’t be recognizable from that of only ten years ago. The renovations and upgrades have been wisely done as the real estate continues to be an excellent investment and is on the rise year over year. Shaw has become a hip and cool place for affluent residents. The marketing of the neighborhood was well-designed as it attracted high-end trendy boutiques, condos, and restaurants and movie theater.

However, visitors as well as potential residents don’t have to go far to see that the area retains many of the Victorian style architecture. This combination of old and new is one of the charms of Shaw that is appreciated by real estate investors and renters alike.

As a leading property management organization in the Washington, D.C. area, EJF Real Estate has been part of the D.C. real estate since the 1920s. Our team work and live in the D.C. communities and take our jobs personally. We know the Shaw neighborhood and we connect investors with the type of rental property that will be a long-term success. As specialists we have designed property management programs that cover a variety of services, from the investor that wants hands-off peace of mind all the way to selected services to reduce time and hassle. Our philosophy is to ensure happiness and the rates are cost-effective.

We proudly serve the diverse neighborhoods of Washington DC and the surrounding region!

Are you making a move to a new neighborhood in the District? Or are you moving here for the first time?

Maybe you are simply interested in what each of our lovely neighborhoods has to offer?

EJF is pleased to serve you! We call this area home and hope you will too!

Shaw is a popular neighborhood in the central part of Washington DC. It has traditionally been a black dominated neighborhood and it is a social and cultural hub of the African American community. Shaw was developed in the early 20th century with blocks of residential streets alongside commercial streets. Today, Shaw is a rapidly developing modern neighborhood in the downtown DC area with an abundance of shops, restaurants, cafes, and bars.

Shaw is a historic district where shops, homes, and businesses have existed for a very long time. Shaw is located just east of U Street, famous among the people as Black Broadway. The presence of thriving theaters like Lincoln Theater and Howard Theater confirm the status of Black Broadway. Shaw experienced riots of the worst kind in 1968 after the assassination of Martin Luther King and most of the buildings of the neighborhood were destroyed. It began to develop once again in the 70s and 80s with gentrification taking place.

Shaw is a neighborhood where families have lived since generations. However, it has been attracting new families because of its cool and relaxed lifestyle. The urban feel of the neighborhood is also attracting lots of young professionals to Shaw. Despite having a small area of just 0.73 sq miles, Shaw has a population of more than 17000 which is increasing with each passing year. The median home value in Shaw is $534684 which is at par with prices in other parts of DC. However, high Shaw rentals ($1855) attract many investors to this neighborhood in hopes of attractive rental income. Shaw property management companies make the job of these investors easy by looking after the affairs of their properties.

Most of the homes in Shaw are Victorian-era row homes through the neighborhood has seen the emergence of many mid-rise apartment buildings in recent past. Shaw has a wonderful transportation system with three stops of the metro rail at U Street Station, Shaw Howard University Station, and Mount Vernon Square Station. There is also a very efficient bus service that allows residents to reach practically all parts of the neighborhood.

Schools in Shaw are served by District of Columbia Public Schools. Most schools enjoy a very high rating among the parents. If you like what you read and plan to buy a property, it is a good idea to hire services of a Washington DC property management company. Property management DC will ensure a steady stream of rental income, taking over much of your burden as a landlord.

Our Commitment to You