Association Management
Our clients love us and we guarantee you will too!
EXPLOREV

EJF is the leader in condominium and cooperative association management for the greater Shaw area. We distinguish ourselves from our competition throughout decades of experience specializing in association management and by delivering excellent customer service to the board members and homeowners who hire us. Our team of professional property managers are leaders in the industry who know what it takes to manage your community and will guide your association to operate with the utmost efficiency through their knowledge and expertise of the condo and coop market and local real estate laws. We offer a wide-range of services and tailor them to fit the needs of each of our communities. We employ innovative technologies which gives us a competitive edge and employ the BEST property managers in the business to provide superior support to our clients.

And the best part - we back everything up with our Happiness Guarantees! How? Within the first 90 days of EJF managing your community, if you are not completely satisfied with our services and decide to cancel during this 90-day period, we will refund all management fees for that period.

Choose the management plan that best fits your community’s needs

A comprehensive plan for communities requiring the full-range of community association services. This plan may be customized to the specific needs of your community.

A plan focused specifically on the financial needs of your community. Choosing this plan assumes you already have professional onsite staff or hands-on board members managing the day-to-day community governance.

Shaw: A Rapidly Developing and Historic Neighborhood of D.C. 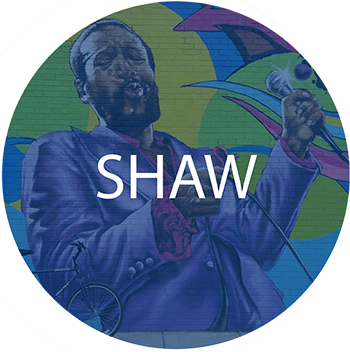 Shaw is a popular neighborhood in the central part of Washington, D.C. Shaw was developed in the early 20th century and has traditionally been a social and cultural hub for African American communities. Today, Shaw is a rapidly developing modern neighborhood, with an abundance of shops, restaurants, cafes, and bars attracting families and young professionals.

Shaw is located east of U Street, famously known by locals as “Black Broadway” due to its plethora of entertainment venues such as the Lincoln Theater and Howard Theater. Most of the buildings in the neighborhood were destroyed during the riots of 1968, following the assassination of Dr. Martin Luther King Junior. However, Shaw was rebuilt in the 70’s and 80’s as gentrification took its course. Most of the homes in this neighborhood are Victorian-era row homes mixed with mid-rise apartment buildings. With its three metro stops and handful of bus lines running through the area, Shaw is easy to access for residents and tourists alike.

Shaw attracts young families and professionals because of its urban, cool and relaxed feel. Despite being just 0.73 square miles, Shaw has a population of more than 17,000 residents. The median home value in Shaw is $534,684, with rentals averaging at $1,855. Shaw property management companies make the job of these investors easy by looking after the affairs of their properties.

If you like to invest in property, it is a good idea to hire services of a Washington, D.C. property management company. Property management DC can help you enjoy passive income from your rental or buying investments.

We proudly serve the diverse neighborhoods of Washington DC and surrounding areas of Maryland and Virginia!

Are you a new association looking for management? Do you need help navigating the nuances of a new property, board and building? Or are you an established board looking for a management change? Perhaps you are in search of a management firm with extensive experience handling a demanding or complex issue? You have come to the right place! EJF is the industry-leader, experienced with all of these situations and more. We manage existing properties throughout DC in the areas listed below and more - contact us today to see if we have expanded to your area!

We love what we do!

EJF supports our team by providing the latest property management technologies,pairing the appropriate property manager with each client, and offering continued training to build happy employees with verifiable property management careers. EJF is very mindful of ensuring that our managers have a manageable-sized portfolio which allows the manager to care for their properties and provide our clients with a consistent level of support. Because we take a team approach to management and our employee's portfolios are carefully structured, employees are happy and our clients are satisfied with our services. In fact, our employee retention exceeds the entire length of time of the average property manager’s career! We are here in this journey with our clients for the long-term.

How are we better?

We guarantee service and satisfaction!

Read our Happiness Guarantees to find out how.

Get a Management Quote

Contact us for a free consultation to see how EJF can help your community!

It’s quick, easy and you are under no-obligation. We look forward to speaking with you to see if EJF Real Estate Services is a good fit for your community’s needs. If you like, we can schedule a meeting with your board or committee to answer any questions you may have.