We tailor our services to fit your needs
Get StartedV

What You Should Expect from Us

EJF Real Estate Services specializes in managing investment properties. Currently, we manage over 700 residential properties with over 97% occupancy. We look forward to working together to bring success to your investment too! EJF embraces the latest process, technology and industry innovations while employing the top property management employees in the region.

We pride ourselves on quality and dedication to serving our clients. We are pleased to offer you both innovation and value. We want our clients to stay satisfied and happy!

To accomplish this, EJF offers these Happiness Guarantees to our Rental Department clients:

If a tenant that EJF screened and placed under an executed lease agreement defaults on the initial term for their lease agreement, EJF will re-lease the Property and waive the Leasing Fee, as long as the default was without Owner approval. *

EJF is paid only when you are paid. If a tenant we place in your rental does not pay their rent as agreed in the lease, you don’t pay a management fee until they pay.

EJF charges a monthly Animal Administrative Fee to the tenant per each approved animal. EJF guarantees to cover the cost of any repair, above fair wear and tear, resulting from the approved animal(s) that is not covered by the tenant’s security deposit. This specifically excludes Service Animals per the Fair Housing Guidelines. This Animal Protection Guarantee is limited to an amount of $2,000.

If you are not satisfied with our services, you may provide a 90-day notice and cancel your contract with no penalty.

Our goal is to provide the best experience for your rental property. We promise to offer you the best customer service available and will always ‘make it right’.

Our Honest and Transparent Pricing Structure

We have a wide range of services to fit your needs:

Discover how much rent you can get for your investment

The Logan Circle area of Washington, D.C. is located on the Northwest quadrant of D.C., and remains the only downtown major circle that is mostly residential. Some of the properties in Logan Circle are listed on the National Register of Historic Places with other locations designated as D.C. Historic Landmarks. The center of Logan 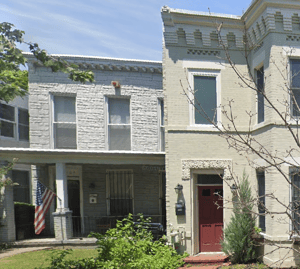 Circle contains an equestrian statue of Major General John A. Logan, commander of the Army of the Tennessee during the Civil War. Logan Circle is entrenched in American history. During the Civil War it was the location of Camp Barker which was a previous barracks that was later converted to a freed slaves’ refugee camp. By the late 1800s the then mayor of Washington, D.C. encouraged the residential development of Logan Circle, adding blocks of Victorian row homes that appealed to the upper middle class seeking to be part of the D.C. status. The addition of parks later complemented the newer larger and more ornate houses. Today much of the real estate have been converted to rental properties, attracting investors as well as the best property management companies in Logan Circle.

Logan Circle has a population of less than 19,000 people, making it the size of a small town. The area remains listed as one of the best places to live in the D.C. area, attracting young professionals and families. Rated as “densely urban” there is a community feel that includes an array of restaurants bars, parks, and coffee shops. The diversity of the neighborhood is another added attraction that is appealing to many looking for a comfortable place to live.

Logan Circle has maintained its historic charm while also becoming a great area filled with entertainment and fun. Visitors and residents alike can stroll down the Logan Circle streets to view the grand houses that display the revival styles of Gothic Victoria, Second Empire, and Romanesque. There are many museums and galleries to visit as well as the Studio Theater that has received sixty Helen Hayes Awards for excellence in professional theater. One of the most notable places to visit is the former residence of Mary McLeod Bethune, a Victorian town home of the woman that founded the National Council of Negro Women in 1935. Bethune was one of the most influential black women and received government officials and heads of state in the house that is now the Mary McLeod Bethune Memorial Museum.

Since around 69% of real estate is rented, Logan Circle is an enticing area for investors. Housing prices remain competitive in Logan Circle, with many selling at 2% above the listing price. The unique lifestyle combined with the high demand for this real estate means that the homes sell at an average of ten days. As investments, homes in Logan Circle have seen an increase at an average of around 27% each year. With a majority of real estate falling in the rental category, it creates the requirement for the highest quality of property management in Logan Circle. EJF Real Estate is intimately familiar with the Logan Circle community. We live and work in the area and have a history of property management that reaches back to 1920. Decades of excellence of service has made RJF Real Estate a top property management organization. As property managers we offer excellence in service that include a variety of options including acting as a single point of contact for tenants, maintenance, leasing, inspections, rent collections, and legal processes.

We proudly serve the diverse neighborhoods of Washington DC and the surrounding region!

Are you making a move to a new neighborhood in the District? Or are you moving here for the first time?

Maybe you are simply interested in what each of our lovely neighborhoods has to offer?

EJF is pleased to serve you! We call this area home and hope you will too!

Our Commitment to You